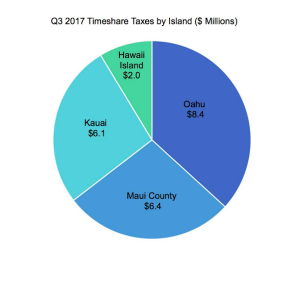 The Hawai‘i Tourism Authority (HTA) today released the Hawai‘i Timeshare Quarterly Report for the third quarter, showing that timeshare accommodations grew by 725 units to 11,233 units statewide compared to a year earlier. The increase in timeshare accommodations included the openings of the 411-unit Hilton Grand Islander in Waikīkī last March and the 195-unit Westin Nanea Ocean Villas on Maui last April.

Transient rental of units to owners and exchangers beyond their allotted timeshare stay, as well as to the general public, represented 15.5 percent of occupied room nights. The remaining balance, 7.7 percent, was used for sales and marketing purposes.

“With so much public dialogue about Hawai‘i lodging focused on hotels and alternative accommodations, the impact of timeshare properties tends to get overlooked. Timeshare visitors consistently fill up resort properties on a year-round basis, their average stay is longer than other visitors, and owners pay more in taxes. “Hawai‘i is one of the few destinations worldwide that considers timeshare properties to be a traditional accommodation. Timeshare has a major influence on tourism’s overall success and Hawai‘i’s ability to attract repeat visitors who commit to spend their time and money annually in the islands. Moreover, timeshare’s appeal continues to expand beyond visitors from North America. Timeshare usage by visitors from Japan has increased significantly in recent years. All of this helps to stabilize Hawai‘i’s tourism industry.”

The decline in third quarter occupancy was partly due to new timeshare units opening in early 2017, as the supply of available timeshare units outpaced demand. This is reflected in the accompanying bar chart showing the timeshare occupancy rate for the state and by island through the first three quarters.

About the Hawai‘i Tourism Authority
The Hawai‘i Tourism Authority is responsible for strategically managing the State of Hawai‘i’s marketing initiatives to support tourism. HTA’s goal is to optimize tourism’s benefits for Hawai‘i, while being attentive to the interests of travelers, the community and visitor industry. Established in 1998 to support Hawai‘i’s leading industry and largest employer, HTA continually strives to help ensure the sustainability of tourism’s success