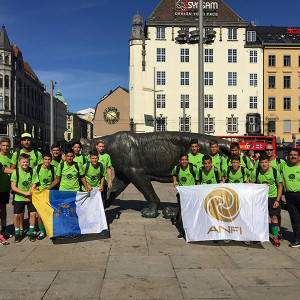 More than a thousand teams set to play at this huge international showcase of up-and-coming young players.

This week, FC Arguineguín will be at the Norway Cup, the largest junior football tournament in the world with more than a thousand teams registered. This group, whose main sponsors include the Anfi Group and Ayuntamiento de Mogán, has the backing and support of David Silva who played junior football in his day. “I wish them all the success in the world and hope that these children turn out to be champion people and champion footballers”, so says Silva who inaugurated the commencement of the first stage of work to be carried out on the future beach at Anfi Tauro https://www.facebook.com/AnfiGroup/photos/pcb.10155845039115437/10155845014640437/?type=1&theater

Arguineguín football club will be the only Spanish team at the Norway Cup, which will take place in Oslo until the first of August. This event is, in its own right, the greatest concentration of teams in a regular tournament worldwide and represents one of the most important events in Norway. “This is a lovely opportunity for children to get to know other teams, another sporting culture and, ultimately, to grow as people regardless of the result”, says Silva. “Personal development is the most important aspect, much more so than the sport” insists Silva, who, together with Anfi, sponsors the team where he started playing football. For its parts, the Anfi Group is “very proud to sponsor Arguineguín’s junior team, where David was shaped as a footballer and from which future champions are sure to rise”, says José Luis Trujillo, General Director of the Anfi Group. This is an event that has become the best showcase for up-and-coming talent worldwide. “We are in a tournament where we can give our full backing to entry level sports”, continues Trujillo.

The ‘Norway Cup’ is essentially a ‘very special’ international football tournament for children and youths between the ages of 10 and 19 years. FC Arguineguín confirms that it “wants to do its very best” as Spain’s only representative. The team hopes to rank at least eighth as they did at the last Norway Cup. The tournament has been held every year since 1972 and is one of the most important in the world in its category with some 30,000 participants from around the world.