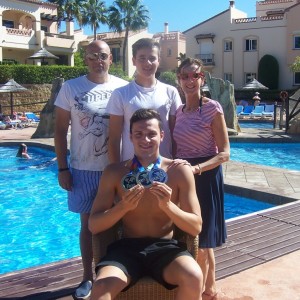 World champion swimmer James Guy packed his swimming shorts and newly won medals for a sunshine holiday with his parents, CLC World members since 2007, on the Costa del Sol.

James, aged 19, became the first Briton to win the World 200m freestyle gold medal at the World Championships in Russia held in August. He also set a new UK record and collected a silver medal for the 400m freestyle, as well as anchoring the British 800m freestyle relay team which also won gold.

Proud parents Andy and Cathy, and 15-year-old brother Luke (all photographed with James), were to be found relaxing round the pool at one of CLC’s premier brand resorts: CLC Santa Cruz Suites, but James stayed out of the water taking time off from swimming!

He now has his sights firmly set on the Team GB Olympic swimming team which will head to Rio de Janeiro next summer, and his new fans at CLC World will be watching his progress all the way!