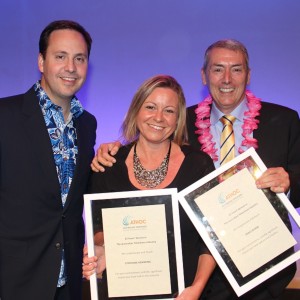 Over 200 of the industry’s finest attended the 24th National Timeshare Awards hosted by the peak body – Australian Timeshare and Holiday Owners Council (ATHOC) at the Gold Coast Arts Centre on Friday night (17/7/15) with a tropical theme.

ATHOC General Manager Laura Younger said, “With around one in every two hundred and fifty residents on the Gold Coast working within the industry, timeshare is a very important part of the Gold Coast Tourism Industry and economy in general.

Data collected from the Australian timeshare industry shows that the appeal of holiday ownership continues to be a strong, stable component of the regions tourism economy, highlighted by high occupancy annual of 94.6% on the Gold Coast

“Ownership is the highest form of loyalty. It is clear timeshare owners are using their scheduled holiday time on the Gold Coast because they have already paid for their accommodation. With the expense of their stay pre-paid, it’s easier for them overcome other economic concerns that can be impeding travel”.

“The high timeshare occupancy rates year-round essentially eliminates seasonal fluctuations in employment, which is a huge benefit to the workforce” said Younger.

“The high occupancy reinforces how vital the timeshare industry has become to the health of tourism and our regions economy,” said Younger. “Timeshare is producing jobs and fuelling economic growth for the Gold Coast – two key facts that are more important than ever these days.”

So why wouldn’t the industry support and celebrate their finest talent in particular Accor Vacation Club who were  in absolutely fine form collecting 8 of the 17 awards. Other winners include Wyndham Vacation Resorts and Resorts within the Classic Holidays Group. (Full list of winners below)

The group enjoyed the festivities of the evening and am sure many struggled to open the reception at their resorts on Saturday morning.

The Australian Timeshare and Holiday Ownership council is the Gold Coast based professional association representing the timeshare and holiday ownership industries. Established in 1994 ATHOC’S role is to represent and oversee industry compliance under ASIC.  ATHOC represents 100 members in Australia ranging from privately-held firms to publicly traded companies and international corporations with interests in timeshare resorts.