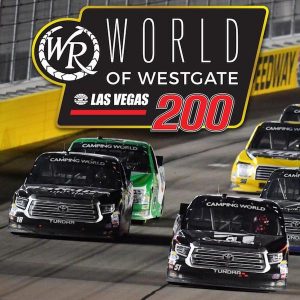 The World of Westgate 200 will take place at the 1.5-mile superspeedway on Friday, Sept. 14, and is the second of four consecutive days of racing at the dynamic motorsports facility. The NCWTS event will be preceded by the Star Nursery 100 NASCAR K&N West Series race at the LVMS Dirt Track on Thursday, Sept. 13, and will be followed by the DC Solar 300 NASCAR Xfinity Series race on Saturday and the South Point 400 NASCAR Monster Energy Cup Series race on Sunday.

“We’re excited to welcome Westgate Resorts to the LVMS sponsor family, and we couldn’t be more thrilled about our September race week,” LVMS president Chris Powell said. “We now have four top-notch sponsors for our quartet of NASCAR events this fall, and the World of Westgate 200 will be a big part of an historic time at our facility. It’s shaping up to be a wonderful week, and our fans are in store for an amazing racing experience they won’t soon forget.”

The World of Westgate 200 will be the second race of the Truck Series playoffs.

“Partnering with Las Vegas Motor Speedway to become title sponsor of a NASCAR-sanctioned event is exciting for everyone at Westgate Resorts,” said David Siegel, Founder & CEO of Westgate Resorts. “NASCAR fans are known for their brand loyalty, and we couldn’t be more excited to expose them to Westgate’s hospitality across our portfolio of resorts.  It has been an exciting year at Westgate with the addition of a new hotel in New York City, the opening of a new water park and resort in Cocoa Beach, Fla., and now the announcement of the World of Westgate 200 to our ever-growing roster of first-class events.”