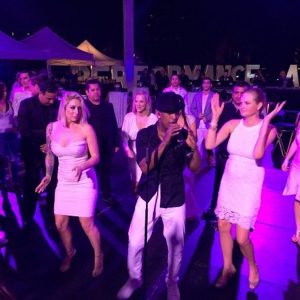 The rainy conditions outside didn’t stop Grammy Award Winning Artist Ne-Yo from performing for 200 members of the Vida Vacations sales team on the night of December 15. The private event was held at the W Punta Mita to recognize the sales team’s outstanding achievements in 2017. Sales Executives, Managers and high-achieving representatives were in attendance celebrating a record year. The team broke a company-wide sales record for volume in one year.

The event was delayed for 45 minutes due to weather conditions and a brief power outage onstage, however, teams from both sides quickly resolved the issue and the artist gave an outstanding performance for near 2 hours. The Grammy award winning singer performed several of his hits including “Because of You”, “Closer” and “Time of our Lives” at the invite-only event. Ne-Yo has been nominated for a Grammy 15 times in his career and taken home the award 3 times.

“Nobody is doing what we are doing right now,” one executive announced to the sales team. “We are in a unique position to change the industry and change tourism in Mexico. The unnamed executive was referring to the unprecedented numbers produced by the Nuevo Vallarta sales team and future projects planned for the Nuevo Vallarta site. November was the 13th consecutive month Vida Vacations had broken a monthly sales record. Only sales representatives who produced a minimum of 1 million USD in sales for the year were invited to the event.

Similar artists such as Robin Thicke and Jessie J have performed privately for the company in the past. For more information related to this event or Vida Vacations please contact Josh Garcia at +52 (322) 182-0035.

About Vida Vacations
Vida Vacations is the exclusive selling representative of private club memberships that offer access to a collection of the finest resorts and entertainment experiences around the world. As a gateway to exclusive Vidanta entertainment and destination resorts, including resort hotels Grand Luxxe, The Grand Bliss, The Grand Mayan, The Bliss, Mayan Palace, and Sea Garden, Vida Vacations offers members unique and unforgettable vacation experiences. As the premier name in private club memberships within Mexico, Vida Vacations provides access to seven spectacular destinations along some of the most beautiful coastlines in the world, including Nuevo Vallarta, Riviera Maya, Los Cabos, Acapulco, Puerto Vallarta, Puerto Peñasco, and Mazatlán. Vida Vacations private club members are immersed in a world of luxury accommodations, amazing restaurants, activities for the whole family, pristine pools, world-class entertainment, and unmatched service. For more information, please visit VidaVacations.com