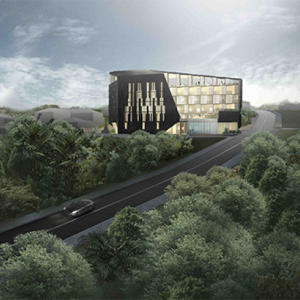 Karma Group and P-A-T-T-E-R-N-S Architects are working together to enhance existing Karma properties and create spectacular new ones. P-A-T-T-E-R-N-S Principals Marcelo Spina and Georgina Huljich have found a kindred spirit in John Spence, Chairman and Founder of Karma Group, as they share a common passion for stepping beyond the boundaries to create experiences and forms that challenge and engage across all the senses.

Led by partners Marcelo Spina and Georgina Huljich, P-A-T-T-E-R-N-S is a leading architectural practice based in Los Angeles, California, bringing a critical and progressive approach to projects across scales, agendas and geographies, insisting on the cultural and social relevance of architectural form and aesthetics in the contemporary city.  P-A-T-T-E-R-N-S has gained international recognition as one of the most intriguing and progressive firms working in architecture today. With more than 15 years of building experience, they have completed projects in the US, South America and Asia and have exhibited worldwide, most notably at the Venice Biennale in Italy, The Chicago Biennial, the Art Institute of Chicago, The San Francisco MOMA and The Vienna MAK Museum, where their work is also part of the permanent collections.

“For a practice that still believes in the idea of the global yet deeply committed to local and vernacular traditions, working with visionary extraordinaire John Spence [and everyone in the Karma family!] has given us the incredible opportunity to think and speculate on a group of very diverse projects on very distinct and remarkable sites,” said Georgina Huljich, P-A-T-T-E-R-N-S Principal.

John Spence’s love and dedication to Architecture has seen him appointed as Edward P. Bass Distinguished Visiting Architecture Fellow at Yale University as well as the Distinguished Visiting Fellowship at UCLA. He also worked with students from the University of Pennsylvania to design a chateau development in Carcassonne, sharing his knowledge and passion with the architects and designers of tomorrow. John’s keen eye for architectural quality has seen his company acquire and build spectacular properties all over the world that perfectly reflect the Karma ethos of offering extraordinary experiences in the world’s most beautiful locations.

“It is wonderful to have the unique brilliance of the team at P-A-T-T-E-R-N-S involved in the exciting projects Karma Group have in the works at the moment,” said John Spence, Chairman and Founder of Karma Group. “From the design of the brand new Karma Sanctum in Uluwatu, Bali and the brilliant Phase VI development at Karma Kandara to the expansion of Karma Reef at Gili Meno and the Karma Kandara Beach Club, we are keeping the P-A-T-T-E-R-N-S architects extremely busy! The results are going to be stunning.”

Standing out from the lush scenery of the island and the often-noisy street JL. Raya Uluwatu, the project aims to present visitors with an iconic oasis: a welcoming and relaxing escape and a memorable spatial and aesthetic experience. Shaped in a crystalline form and clad in black volcanic stone that contrasts gold accents in its interior, the project is distinctly contemporary in its aesthetics while insinuating local Balinese motifs. By orienting the suites towards the exterior in the direction of the north-west views, the V-shaped mass maximizes exterior views whilst preserving a small existing temple located towards the back of the site.

Phase VI is the natural extension of the existing Karma Kandara resort masterplan and an ambitious conclusion for this magnificent site. Consisting of various unit typologies including apartments, penthouses and townhouse style villas and to be executed in various sub-phases, the ambitious proposal aims to take full advantage of the natural topography maximizing views and access within the resort. The project is organized around a central communal courtyard which includes various amenity spaces: a lazy pool, a swim-up pool bar and a restaurant, all together establish a new destination within the resort, affording guests and visitors with endless possibilities for social events and gatherings.

On the smallest island of Indonesia’s Gili Archipelagos –Gili Meno- Karma Reef resort is located in an untouched paradise and the most peaceful and under developed of the three Gilli islands.

With 270 meters of frontage towards the sea, the new resort will be organized around a playful radial configuration with Karma Beach Club as its epicenter. Intending to capture the irreplaceable essence of this small idyllic island, the radiating organization allows for the optimization of individual views while creating a unique feeling of cohesion between distinct areas of the resort. Surrounding its center –located less than 70 meters from Gili Meno Pier- are gathering spaces including the main common activities and amenities such as the Lobby, Restaurant, Bar, shared pools and Spa with a connection towards the sea, as well as an alternated and “natural” distribution of a series of unique villas around it as well as other complementary common amenities connected through internal pathways.

The project consists of the extension of Karma Kandara Beach Club, one of the most exclusive and attractive beach clubs on the island. Connected by a wooden bridge across a small stream of water descending from the cliff, the new design extends the local Balinese style of the existing club, blending it with a dynamic composition and a contemporary sense of aesthetics. Responding to the singularity of a unique site, the extension comprises an undulating pool anchored around a natural boulder on one side and a swim-up bar with a conical roof on the other. Mimicking the natural geography of the site, an engaging cloverleaf-shaped bar will create a lively experience as it supports a series of cascading terraces with private cabanas and lounge chairs.

“Research, speculation and contemporary design have been an essential part of our relationship with Karma Group’s John Spence,” said Marcelo Spina, P-A-T-T-E-R-N-S Principal. “In all of these, we share his enthusiasm for new ideas as well as his belief in making each destination a memorable experience, and having Architecture as a vital aspect of that experience.“

Karma Group is an award-winning international travel and lifestyle brand offering extraordinary experiences in the world’s most beautiful locations and is headed by Chairman and Founder, John Spence, former Ernst & Young Entrepreneur of the Year and member of the 2013 judging panel for the Ernst & Young World Entrepreneur of the Year. John was honoured by the Yale University School of Architecture by being appointed the Edward P. Bass Distinguished Visiting Architecture Fellow and has also been awarded a Distinguished Visiting Fellowship at UCLA as well as working with students from the University of Pennsylvania to design a chateau development in Carcassonne. The Karma Group is comprised of Karma Resorts, Karma Retreats, Karma Royal, Karma Estates, Karma Beach, Karma Spa and Karma Boutique. The Group is currently operating 22 resorts in more than 10 countries, including Australia, France, Germany, Greece, India, Indonesia, Thailand, Vietnam and the United Kingdom. There are currently five properties in development and the Group is negotiating three separate acquisitions in Scotland (a golf resort), Cyprus and Bulgaria. In 2016, Karma group and Sanctum Hotel Group announced a joint venture to develop a series of authentic rock ‘n’ roll styled and orientated hotels in strategic locations around the world, accompanied by an exclusive private membership club. In 2017, Karma were awarded the contract to manage and develop the golf course on Rottnest Island in Western Australia and in Greece, RCI, the worldwide leader in vacation exchange, selected Karma Group to manage its operations in the Greek market whilst redevelopment began on Karma Minoan in Crete. Karma Group is a sponsor of the England Rugby 7’s team through the 2017/18 season, the Commonwealth Games and the 2018 Rugby World Cup 7’s in San Francisco as well as the Rosslyn Park HSBC National Schools Sevens, the world’s largest school rugby tournament.