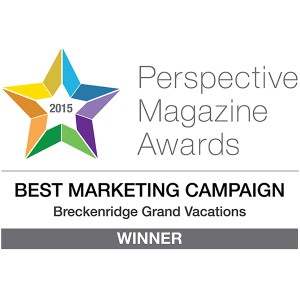 Breckenridge Grand Vacations, the most successful single-site timeshare company in the world, was recognized by the timeshare industry with Perspective Magazine’s awards of Best Marketing Campaign and Best Place to Work. These awards are considered the highest achievements in timeshare, as the winners are decided by a vote of their peers. Perspective Magazine, a leading independent trade publication, presented the honors at its Gala Awards Ceremony during the GNEX 2015, held February 17 in San Diego.

The Perspective Best Place to Work award was not the first time the employees of Breckenridge Grand Vacations have seen its company chosen as a top place to work. The company has also been honored in its home state of Colorado as 33rd out of 1,300 companies statewide as the best place to work, and as the only mountain company to rank in the top 100 employers in the state. Perspective sets high standards for the Best Place to Work award. Measurements are based upon work environment, training, career advancement prospects, and atmosphere. Considerations also include team building, pay and benefits, personal development, and management support.

Breckenridge Grand Vacations took home a second award for Best Marketing Campaign for the integrated launch campaign for their fourth resort, the Grand Colorado on Peak 8. The competition was heavy for this award that looks for companies with the most engaging, inspiring, clever, distinctive and/or successful marketing campaign in digital, print, or a combination of both.

[dt_quote type=”pullquote” layout=”left” font_size=”big” animation=”none” size=”1″]“We don’t need proof that our company is the best place to work, but we always appreciate hearing it,” said Ginny Vietti, Vice President of Marketing for Breckenridge Grand Vacations. “These awards are a confirmation of our continued excellence in customer service and the company wide support of our team. GNEX 2015 was our first foray into the Perspective Magazine awards program and we are honored to be among the excellent candidates that were nominated.”[/dt_quote]

Perspective Group is a media sponsor of more than 30 industry events per year and serves on a number of trade association committees. The group also hosts its own annual industry leader event, the Global Networking Expo (GNEX Conference), and Canadian Resort Conference (CRC) on behalf of the Canadian Resort Development Association (CRDA). For more information, visit https://perspectivemagazine.com/services