Karma Group introduces a new addition in Vietnam Perched on the banks of the Thu Bồn River is Karma Song Hoai. 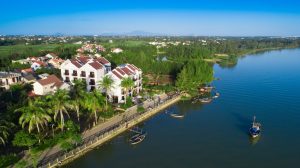 The illustrious Karma Group has welcomed another elegant property into its luxury resort portfolio, this time in Vietnam. Sitting among the picturesque UNESCO World Heritage-listed town of Hoi An sits Karma Song Hoai.

This sprawling property comprises 51 stylish suites and family rooms, each boasting private balconies and accompanied by a cluster of restaurants, bars, gyms, and even a spa. but the attraction of the resort doesn’t just lie in its host of amenities, but its location; Karma Song Hoai is perched on the banks of the Thu Bồn river, just 1 kilometre or a short stroll or bike ride from the old town. Though you can choose to take it easy, and embrace the opportunity to be dropped by golf cart into the heart of town. Similarly close are the pristine Cua Dai and An Bang Beaches, just a 20 minute bicycle ride away from the resort.

Chairman and Founder of Karma Group, John Spence, proudly announced the news to friends and colleagues recently; “I am delighted to announce the acquisition of our latest property Karma Song Hoai,” he said.

“At the moment the resort is closed due to the pandemic, but we are very confident that we will be able to open in the near future and create another amazing experience for members and guests. I would like to thank all involved in this new resort, especially given the current complicated circumstances. Like many of you I am looking forward to visiting this beautiful country again when the world begins to re-open, and I have every confidence that in the years to come this property will be a shining star.”

BACKGROUND ON KARMA GROUP
Karma Group is an award-winning international travel and lifestyle brand offering extraordinary experiences in the world’s most beautiful locations. The company is headed by Chairman and Founder, John Spence, a former Ernst & Young Entrepreneur of the Year and member of the judging panel for the Ernst & Young World Entrepreneur of the Year. Among his numerous other awards, John was honoured with the Edward P. Bass Honorary Fellowship at Yale University in 2019 in the School of Architecture, marking the first time Yale has extended this to the same person more than once.

The Karma Group comprises Karma Estates, Karma Resorts, Karma Retreats, Karma Royal, Karma Beach, Karma Spa, Karma Kasa, Karma Club and Karma Boutique. The Group has developed multiple resorts and is currently operating 33 resorts in more than 10 countries, including Australia, France, Germany, Greece, Italy, India, Indonesia, Thailand and the United Kingdom. Four of these resorts were acquired in the past six months with Karma Group demonstrating an ability to acclimatize quickly and successfully to a drastically shifting landscape, with the company choosing to focus on domestic travel markets. These new additions to the company’s ever-growing portfolio include the opulent Karma Seven Lakes in India’s romantic Udaipur, and the historic Karma Salford Hall, a Property formally owned by King Henry VIII in the English countryside. There are presently seven properties in development, with Karma Group negotiating further acquisitions in Australia, India, Indonesia, Laos, Spain and the UK.

In 2021 a series of new offerings were introduced, including A private member’s club with a difference, Karma Club, and the establishment of a brand new bespoke service for existing Karma Group members in Karma Concierge.

Karma Group is additionally involved in the world of fine wines and spirits. Since 2016, John Spence has been collaborating with key winemakers across the world to produce bottles that have formed the Karma Wines offering, from Tuscany to Bordeaux. A signature handcrafted small batch gin has also just been welcomed, a spirit crafted from botanicals sourced from the destinations where the group’s resorts, hotels, and retreats are located.

Outside of the hospitality realm, Karma Group remains a company devoted to supporting its surrounding community. Karma Group continues to run and support a number of Philanthropic initiatives worldwide under the Karma Cares banner. These include ongoing sponsorship of Bangalore non-profit Christel House India, The Bali Life Foundation for disadvantaged children, and Vietnam’s Children’s Hope In Action (CHIA), alongside involvement in ongoing scholarships and fundraisers annually. More recently, Karma Group spearheaded the drive for mass vaccination in Bali, and joined forces with Operation Recuperation, a UK initiative focusing on supporting front-line healthcare providers recover from the fight against Covid-19.