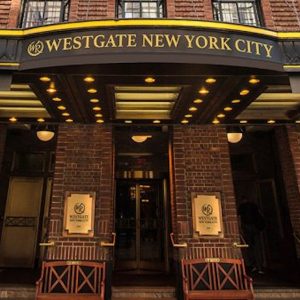 Westgate Resorts announced today the acquisition of the former Hilton New York Grand Central, a 23-floor, 300-room, two-tower hotel located in the historic Tudor City neighborhood within the heart of Midtown Manhattan’s East Side that has been rebranded Westgate New York City.

“It is with great excitement that I announce Westgate has purchased its first urban hotel located in none other than the Big Apple,” said David Siegel, founder & CEO of Westgate Resorts. “This puts the Westgate flag proudly in the heart of one of the most visited cities in the world, located on East 42nd Street – only a few blocks from Times Square, the United Nations and Grand Central Station.”

Recognized by Historic Hotels of America, this historic landmark opened in 1931 and was formerly known as the Hotel Tudor, Hilton Manhattan East and the Hilton New York Grand Central. It features gothic-revival architecture and pre-war charm blended with modern luxuries. Westgate will continue to operate the resort as a hotel while it undergoes an extensive renovation. The company will also explore opportunities in the future to add timeshare villas. Starting June 6, Westgate Timeshare Owners will receive exclusive discounts toward guest room stays at the hotel.

An established leader in the timeshare industry for more than 30 years, Westgate Resorts has more recently put additional emphasis on its hotel offerings. The company provides hotel accommodations in destinations across the nation including Las Vegas; Orlando, Fla.; Park City, Utah and more. The company now caters to travelers beyond the leisure market with options for business travelers as well as meetings and groups.