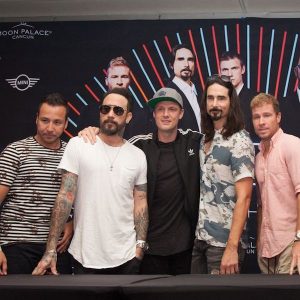 The most successful band in the history of pop music: the Backstreet Boys kicked-off their first international presentation after their successful residency in Las Vegas, on December 29  & 30th at the Moon Palace Arena.

Nick Carter, Howie Dorough, Brian Littrell, AJ McLean and Kevin Richardson closed out 2017 in style! The band participated in a press conference with local, national and international press, before taking the stage at the Moon Palace Arena, a 140,000 square foot convention center, fully equipped with the latest technology and audiovisual equipment, which opened in 2014.

The band opened up with one of their iconic songs “Larger than life,” taking everyone back bto the 90’s. Other hits included “Quit playing games with my heart” “Show me the meaning,” and their number one hit “Everybody” which were among the favorites.   Each of the members added their own personality and style to the performance with customed outfits that replicated the originals from each music video created as well as their unique choreography that surpassed all expectations.

Spotted in the audience were noteworthy celebrities such as former NSYNC band member, Joey Fatone and  The Real Housewives of New Jersey’s own Teresa Guidice who enjoyed some quality time with daughter Gia.

For 24 years the Backstreet Boys, one of the most successful groups in music history, has continually delivered the finest pop music one has to offer, making them one of pop’s most influential performers. With countless #1s, record-setting tours, numerous awards and worldwide sales in excess of 130 million, BSB has been recognized as the best-selling boy band in history. In 2013, BSB celebrated their 20th Anniversary with the release of the album In A World Like This, which saw the group receive a star on the legendary Hollywood Walk of Fame, perform for the President of the United States, and make an unforgettable appearance in the Seth Rogen hit film “This Is The End.” Due to the overwhelming demand, the In A World Like This world tour was extended multiple times, amounting to what became the group’s biggest tour in over 10 years. On March 1, 2017 Backstreet Boys kicked off their Las Vegas residency “Backstreet Boys: Larger Than Life” in The AXIS at Planet Hollywood, and it has become one of the fastest selling residencies in Las Vegas history. BSB are currently working on their next album.