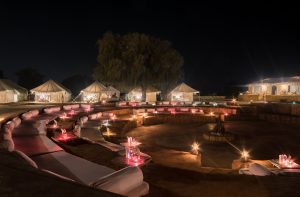 A number of exciting activities on offer at Karma Golden Camp include dune-safaris, para-sailing, para-motor-gliding and quad biking in an incomparable desert setting. Or for less adrenaline and more relaxation, enjoy a laid-back camel safari, cocktails at sunset or star gazing in the magnificent desert night sky – sure to impress with zero light pollution. An unforgettable romantic experience, the hotel also offers private dinners among the dunes entertained by Rajasthani folk dancers and singers.

Close to the vibrant colours of Jaisalmer, with its famous fort and palaces, the airport is easily accessible from Karma Golden Camp, approximately 45 minutes drive away, or for road trip fans, fly to Jodhpur and enjoy a 4.5 hour adventurous drive.

Other nearby highlights include:

Jaisalmer Fort
A UNESCO World Heritage Site and one of the largest forts in the world, Jaisalmer Fort is also the second oldest fort in Rajasthan, built in 1156 AD where it stood at the crossroads of important trade routes (including the ancient Silk road). Known as a ‘living fort’, a quarter of the city’s population still live within the fort.

Kuldhara Ghost Village
17km west of Jaisalmer, this once prosperous village is now long abandoned and maintained by The Archaeological Society of India as a heritage site. According to a popularly held notion, the village is inhabited by ghosts.

Sam Sand Dunes
Approximately 42 km from Jaisalmer in the midst of the Thar Desert, these sand dunes are amongst the most famous in Rajasthan and a popular spot for desert safaris and camel tours.

Desert National Park
One of the largest national parks, covering an area of 3162 km², the Desert National Park is a haven for migratory and resident birds of the desert. Many eagles, harriers, falcons, buzzards, kestrel and vultures are spotted here.

Karma Golden Camp joins Karma Group’s expanding portfolio of over 40 properties, with 36 currently operating in 11 countries, six under development and more resorts to be announced soon.

BACKGROUND ON KARMA GROUP
Karma Group is an award-winning international travel and lifestyle brand offering extraordinary experiences in the world’s most beautiful locations. The company is headed by Chairman and Founder, John Spence, a former Ernst & Young Entrepreneur of the Year and member of the judging panel for the Ernst & Young World Entrepreneur of the Year. Among his numerous other awards, John was honoured with the Edward P. Bass Honorary Fellowship at Yale University in 2019 in the School of Architecture, marking the first time Yale has extended this to the same person more than once.

The Karma Group comprises Karma Estates, Karma Resorts, Karma Retreats, Karma Royal, Karma Beach, Karma Spa, Karma Kasa, Karma Club and Karma Boutique. The Group has developed multiple resorts and is currently operating 36 resorts in more than 11 countries, including Australia, France, Germany, Greece, Italy, India, Indonesia, Spain, Thailand, Vietnam and the United Kingdom, with six under development. Four of these resorts were acquired in the past six months with Karma Group demonstrating an ability to acclimatise quickly and successfully to a drastically shifting landscape, with the company choosing to focus on domestic travel markets. These new additions to the company’s ever-growing portfolio include the opulent Karma Seven Lakes in India’s romantic Udaipur, and the historic Karma Salford Hall, a property formerly owned by King Henry VIII in the English countryside. There are presently seven properties in development, with Karma Group negotiating further acquisitions in Australia, India, Indonesia, Laos, Spain and the UK.

In 2021 a series of new offerings were introduced, including a private member’s club with a difference, Karma Club, and the establishment of a brand new bespoke service for existing Karma Group members in Karma Concierge.

Karma Group is additionally involved in the world of fine wines and spirits. Since 2016, John Spence has been collaborating with key winemakers across the world to produce bottles that have formed the Karma Wines offering, from Tuscany to Bordeaux. A signature handcrafted small batch gin has also just been welcomed, a spirit crafted from botanicals sourced from the destinations where the group’s resorts, hotels, and retreats are located.

Outside of the hospitality realm, Karma Group remains a company devoted to supporting its surrounding community. Karma Group continues to run and support a number of Philanthropic initiatives worldwide under the Karma Cares banner. These include ongoing sponsorship of Bangalore non-profit Christel House India, The Bali Life Foundation for disadvantaged children, and Vietnam’s Children’s Hope In Action (CHIA), alongside involvement in ongoing scholarships and fundraisers annually. More recently, Karma Group spearheaded the drive for mass vaccination in Bali, and joined forces with Operation Recuperation, a UK initiative focusing on supporting front-line healthcare providers recover from the fight against Covid-19.
www.karmagroup.com