Emirates Touches Down In Orlando 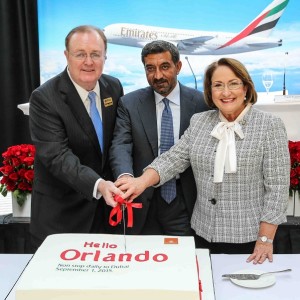 Emirates, a global connector of people, places and economies, today commenced daily nonstop passenger service between Dubai and Orlando International Airport. A VIP delegation and a contingent of international media were aboard the inaugural flight, which carried passengers from 29 different countries to Orlando.

“Our new daily service will enable Emirates to grow alongside Orlando, one of the world’s premier leisure destinations and a dynamic business center,” said His Highness Sheikh Ahmed bin Saeed Al Maktoum, Chairman and Chief Executive of Emirates Airline & Group. “The launch of this nonstop route will bring Emirates’ unique product and award-winning service to passengers flying from Central Florida to our home in Dubai and beyond to more than 140 global destinations. Since 2004, Emirates has carried more than 11 million passengers on its U.S. flights and this new route will open up even more options for passengers travelling to Orlando. Additionally, the aircraft on this route has the capability to carry more than 17 tons of cargo in each direction every day, which will support Florida’s export market.”

“Florida is on a mission to become the global leader in job creation and we are excited about the new Emirates nonstop flight between Orlando and Dubai,” said Florida Governor Rick Scott. “We welcomed more than 97 million visitors to our state last year and every 85 tourists creates another Florida job. We know our tourism industry helps grow our economy and that is why we are investing $145 million at the Orlando International Airport to expand the South Terminal Complex so we can continue to increase domestic and international air service, like the new Emirates flight.”

“Emirates’ nonstop service to Dubai opens a new world of opportunity for Orlando to pursue tourism and business exchanges with the Middle East, Africa and Asia,” said Orlando Mayor Buddy Dyer. “Business and leisure tourism is critical to Central Florida’s economy and this new direct service will make it easier for travelers to get to and from Orlando, creating new jobs and opportunities for our residents.”

“Emirates is a premier airline and this is a significant new air service route for Orlando International as it opens the gateway to the Middle East, Asia, Africa and beyond,” said Frank Kruppenbacher, Chairman of the Greater Orlando Aviation Authority. “The benefits of this new daily service will be measured both financially and culturally. The $100 million annual economic impact to Central Florida will be coupled with the potential to connect to diverse cultures of the world.”

A first: One-off A380 service at Orlando International

On the special occasion of its Orlando launch, Emirates dispatched its flagship aircraft – an Airbus A380 – to celebrate the milestone and meet demand for the first flight. The inaugural Emirates flight was the first A380 service to touch down at Orlando International Airport. The jet features two Shower Spas and the signature Onboard Lounge, which offers passengers a space for socializing over fine wines, cocktails, hors d’oeuvres and delicacies prepared by five-star chefs.

Regular scheduled service on the Orlando route will be offered on the U.S.-built Boeing 777-200 LR aircraft, which seats 266 passengers, including eight private First Class Suites, 42 Business Class lie-flat beds and 216 spacious Economy Class seats. Emirates operates a fleet of 143 Boeing 777’s, the most of any airline in the world.

Dubai has quickly become a global destination for both business and leisure travel. Like Orlando, families can enjoy a plethora of family-friendly hotels and attractions, including larger-than-life theme parks. Visitors can also enjoy Dubai’s history by visiting the textile markets, and the spice and gold souks that line the streets of Old Dubai. The global financial capital is home to world-class dining, nightlife, hotels, golf courses, architectural landmarks and shopping.

Emirates passengers can connect seamlessly from many destinations in the U.S., the Caribbean and South America through codeshare partner JetBlue’s regional hub in Orlando, which serves 24 cities including San Juan, Puerto Rico; Bogota, Colombia; and Nassau, The Bahamas.

First Class and Business Class passengers can also travel to and from the airport (up to a distance of 90 miles around Orlando International Airport) via Emirates complimentary Chauffeur-drive service.

Parents flying with children are well-attended with access to free strollers at Dubai International Airport, a choice of children’s toys, specially prepared children’s meals and dedicated children’s channels on board to keep younger passengers entertained.

Explore more of the Americas with Emirates’ Pass
Emirates passengers looking to explore beyond the airline’s network of American destinations now have dozens of options with the Americas Pass. With one combined ticket, travelers flying to any of Emirates’ 10 U.S. destinations can connect to more than 90 cities across America, Canada and Latin America through Emirates’ five partner airlines: Jet Blue, Alaska Airlines, Virgin America, WestJet Airlines and Porter Airlines.

For more information about Emirates and to book tickets, please visit www.emirates.com.

Emirates and the U.S.
Founded in 1985, Emirates is a global connector of people, places and economies. Based in Dubai, the airline’s global network serves 149 destinations in 81 countries across six continents. Its luxurious amenities, regionally inspired gourmet cuisine, award-winning in-flight entertainment system – ice – and unmatched hospitality provided by its iconic multilingual Cabin Crew have made Emirates one of the world’s most recognized airline brands.